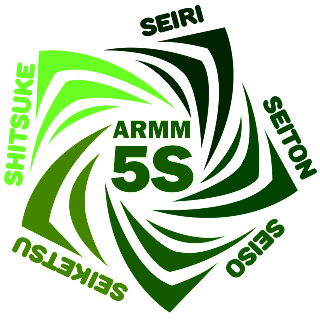 To realize this, one of the essential ways is to practice the principles of KAIZEN through the adoption of 5S Good Housekeeping Program. To briefly explain, 5S corresponds to five effective ideologies and practices such as Seiri (Sort), Seiton (Systematize), Seiso (Sweep), Seiketsu (Standardize) and Shitsuke (Self-Discipline). Meanwhile, KAIZEN is a Japanese word that consists of two words, the KAI which means “CHANGE” and ZEN which means “GOOD”. To simply put into words, it is the conceit of continuous improvement.

On July 15 2014, the heads and officials from the different offices in the Office of the Regional Governor (ORG) and other Agencies of ARMM learned the concept and the essence of 5S Good Housekeeping Program through an orientation facilitated by the Development Academy of the Philippines (DAP). Right after the orientation was the training and the creation of 5s Core Team. From there, the Continuous Coaching on Quality Workplace Standard (QWS) as part of the 5S training was held on August 18-20, 2014. Part of the activity was the first-hand simulation and implementation of AKAFUDA where 5S Core Teams together with DAP personnel visited different offices. AKAFUDA ensures that from time to time, offices are perceived and given proper actions on their concerns in their office areas, materials and equipments. This practice is an essential factor in achieving the full implementation of the 5S Program.

Part of the series of 5S implementation in ARMM was the Five-Day Observational Trip in Manila on September 8-12, 2014. Said activity was attended by selected participants from the 5S Core Team of the different offices in ARMM to introduce 5S and how it is being implemented.

With the initiative of the ORG 5S Core Team and unwavering support of the Regional Governor MUJIV S. HATAMAN, the ARMM 5S Big Clean-Up Day was launched on September 1, 2014 at the ORG Compound. Said activity was participated by the entire ORG-ARMM employees and officials to achieve the purpose of 5S Good Housekeeping Program. On the same day, an Agency Visit was carried out by the 5S Audit Team to ensure the proper implementation of the said program. Over 400 ARMM Agencies were audited and selected offices were recognized because of their well done job.

Some of the many significant accomplishments relative to 5S implementation in year 2014 were the promotions of the said Program through social media. The ARMM 5S Facebook Page was created to further encourage people to practice 5S and to actively update people about its implementation thus, following the guideline of transparency.

Another modern means of walking the positive transformation was the idea of developing the so-called ‘Mapping’ within ORG Compound. Through this initiative, people now have an access to locate where to properly dispose their waste products when inside the ORG compound.

Early in 2015, the ARMM Regional Office then aspired for the ISO 9001: 2008 Certification. ISO is a worldwide federation of national standard bodies with representatives from each of approximately 167 countries. Furthermore, it serves a benchmark for setting up a Quality Management System. To conscientiously prepare for this new objective, the ISO Core Team was created. Various trainings and workshops were conducted as well.  The application and preparation for the ISO Certification was assisted by DAP.

To comply with the ISO Certification requirements, the ORG offices, units and divisions, as well as the employees worked hand-in-hand to prepare the Certification Road Map, 5S Internal Audit and ISO-Quality Management System (QMS). QMS comprises the Quality Manual (a description of the interaction between the processes of the QMS) and the Quality Procedure (established processes to ensure everything is performed).

March 2015, 5S Team Building was conducted to strengthen the bond among the employees who work for 5S.  Also, the activity highlighted the introduction to Document Management System (DMS).

May 2015, a new policy was implemented to support 5S Program—the Solid Waste Management Program. The Office of the Regional Governor benchmarked this certain policy from the enshrined principles of the Republic Act 9003, also known as the “Ecological Solid Waste Management Act of 2000”. The program intentioned to make a cleaner and healthier workplace and environment within the ORG-ARMM premise. All ORG Offices/Divisions must observe waste segregation system by using labeled  trash bins categorized as Biodegradable, Non-Biodegradable or Recyclables.

2015 was also the start of the implementation of another system—the Labeling System/Visual Workplace. This system has strengthened the impact of 5S by properly installing labels in documents, filings, workstations, gateways and key areas. The ORG Administrative Management Services (AMS) – Records Division took the initiative in providing labels for documents, filings, entrances and workstations.

For further improvements and organizations, ORG then released an order to ARMM offices and agencies to properly utilize their respective Bulletin Boards. This serves as an effective avenue of informing the employees and other people the crucial information, circulations and announcements. This initiative was yet another action to support the 5S implementation.

On August 4, 2015, ORG 5S Clean-Up Day was successfully conducted.  Said activity was participated and supported by the Regional Governor MUJIV S. HATAMAN himself and other ORG heads and officials, as well as the employees. Right after the activity, 5S Audit was conducted to audit all the offices for their 5S compliance.

December 22, 2015 was a milestone for the Office of the Regional Governor. All efforts and hardships were paid as the ORG has finally achieved its ultimate goal—the ISO Certification. Mark Anthony Lugay, Management System Auditor from TUV Rheinland Philippines, Inc., awarded the ISO 9001:2008 Certification to ORG after satisfying the given standards. ORG was commended for its ‘good implementation of 5S’.

To further promote the 5S standards and practices among ARMM Agencies and Offices, 5S Clean-Up Day was successfully conducted on February 1, 2016. Simultaneous to the said program was the launching of the characters/mascots, Kai and Zen. These characters represents the principles and promotion of Continuous Improvement as part of the implementation of 5S Program.  Gracing the program was the awarding of the Top 5 Performing Agencies given by Executive Secretary ATTY. LAISA M. ALAMIA. Such awardees were the TESDA, DPWH, RHRC, OSCC and RBMO.  The result was based from the inspections conducted on January 19-22, 2016. Other awards include the Special Kaizen Award given to RPDO for meeting the HR level 2 indicators for its HR Systems, TESDA for being the first agency to have an ISO 9001: 2008 Certification, DENR for supporting the ORG by contributing 81 garbage cans, and lastly, DepEd for its total implementation of 5S Program, not just on the Regional Office but also in its Provincial Offices.

On March 23, 2016, a Region-wide Consultation Meeting was conducted at Basilan Training Hall, RELC. During the activity, the contribution from the different agencies for the payment of Commemorative Postage Stamps was determined. The consultation was attended by all ARMM line agencies, offices and bureaus.

Months after the consultation meeting, the Issuance of the Commemorative Stamps happened on May 6, 2016. The request for the issuance of these stamps was a way to promote the Quality Management Systems of the ORG-ARMM. A limited number of special stamps (101,000) was distributed by the Philippine Postal Corporation (PPC) to 192 countries around the world.

Pursuant to ORG-ARMM’s Rule of Transparency, disseminating information about 5S Implementation is very significant. In doing so, a simple publication was conceptualized. This publication is entitled, “The Adventures of Kai and Zen”. Two episodes were already published and distributed. The 1st episode features the ARMM 5S Clean-Up Day of 2016 as well as the launching of Kai and Zen as icons of Continuous Improvement.  The 2nd episode was Zen’s Photography which exhibits the best of her photography during the region-wide 5S Audit in ARMM. Also, episode 2 features the Top 5 Performing Agencies in the implementation of 5S.

Meanwhile, to be able to easily provide evidence of activities, guidelines, and documents, a good storage or archive area should be implemented. Because ORG-ARMM is committed to perform good governance reforms, 5S Good Housekeeping Program was applied to improve the archive area. From time to time, archives at the Records Division are being checked and properly managed to preserve important documents.

On October 7, 2016, Continual Improvement Training (CIT) Consultation Meeting was conducted as part of the Records Management Improvement Program. In partnership with the ARMM Development Academy (ADA), the AMS – Records Division initiated the said training to (1) identify challenges experienced by the Administrative Heads and 5s focal persons of the offices, agencies, and bureaus in implementing 5s; (2) Identify solutions to solve problems presented; (3) To visualize the need of agencies, offices and bureaus in ARMM in terms of 5s, SPMS, and QMS Trainings.

In support of the Quality Management System (QMS) activities, we actively participated in Cascading Session of the Quality Manual so that new policies are well understood by every ORG employee. Furthermore, the session aimed to follow up the employees’ compliance on standards set by ISO 9001:2008. Said activity was conducted last October 13, 2016.

October 21, 2016, the AMS – Records Division in partnership with the ARMM Library, and Bureau of Cultural Heritage (BCH) steered the formulation of the First ARMM Archives Day.  The said event was highlighted by the Turning-over Ceremony of the Commemorative Stamps from the Philippine Postal Corporation to the Office of the Regional Governor. This is to promote ORG’s achievement of ISO 9001:2008 Certification for the other agencies to emulate or follow suit.

As the ARMM 5S Facebook Page continues to promote good administrative management, the Quote of the Day (QOTD) featuring KAIZEN was brought into social media. Every other day during the work week, there has to be “management quotes” posted through 5S Page cited from the different prominent people, authors, etc. This initiative aims not just to promote the page and the 5S implementation per se, but also, to inspire and motivate the viewers by pondering on those posted quotes.

Indeed, all of the efforts exerted by the Heads, Officials, and employees of the Office of the Regional Governor to implement 5S Program are all showcased in the three consecutive years of quality service. This administration hopes to continue the kind of services conveyed for the continuous improvement of the ARMM. Surely, this advocacy will be realized if we continue to act as the Working ARMM. 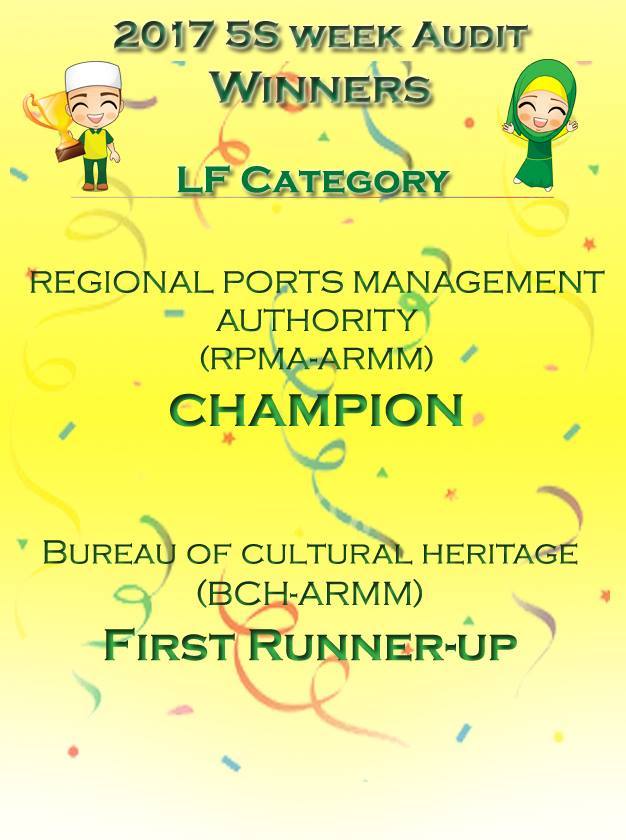